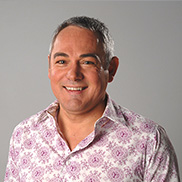 As a biomedical scientist, Eric worked on HIV brain research before he contracted HIV. Now his own brain bares the consequences of HIV. Anti-HIV medications no doubt saved his life but did not prevent him from becoming infected with viral meningitis where he experienced migraine-like headaches for 6 months. The fight to clear the infection from his brain precipitated poor mental health – something HIV is infamous for – and he went on to be diagnosed with bipolar type II.

Whilst now in remission from bipolar, the collection of daily medications and HIV itself blunt his thinking causing fatigue. To Eric it seems a great irony that he was able to complete his PhD on asthma genetics whilst living with HIV but for now a research career is beyond him, not least because of the stigma of his disorders.

Eric’s journey from a farm boy brought up in a fundamentalist Christian religion with no name to an openly gay scientist specialising in molecular biology is a story of escape from rigid family expectations and a battle over homophobia. When he was doing HIV research, he formed a relationship with a uniformed member of the Defence Force that was to last for more than 13 years. It was logical to discuss HIV testing but, with the ban on gays and lesbians in the military, to ask defence doctors for a HIV test would have meant dishonourable discharge and termination of a prospering career. When the ban was lifted in late 1992, Eric’s partner was still afraid of ongoing stigma and the issue remained unresolved.

After 5 years together they drifted into not using condoms and subsequently Eric was infected with HIV. The warmth of a loving relationship had caught Eric unaware. In speaking out, Eric promotes discussion of both the medical and social aspects of HIV and living with a mood disorder.

I am an AIDS activist, facilitator, trainer and community-based volunteer  coordinator of an HIV and Hepatitis C support and education…

My name is Glenn Filbin and I was diagnosed HIV Positive in 1997. I am about to turn 52 and…